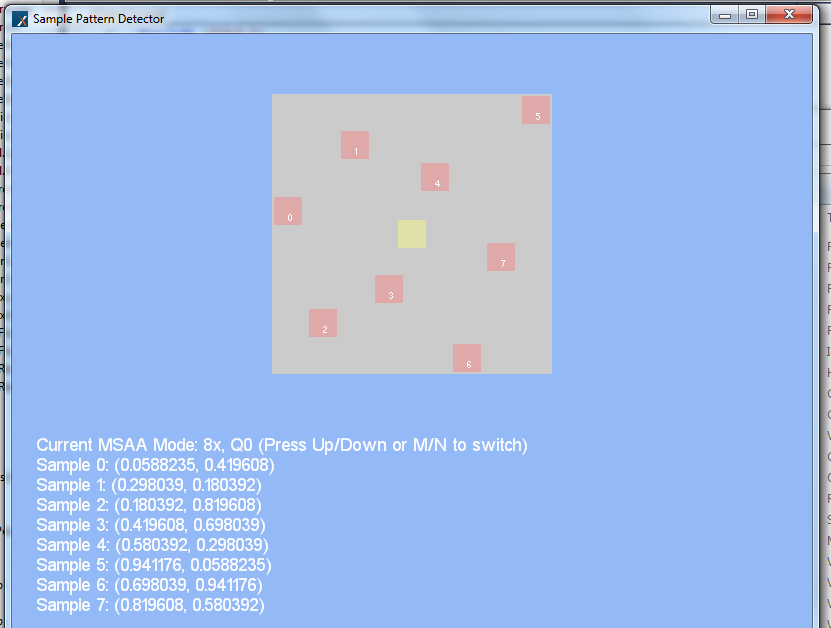 Recently I’ve been experimenting with AA techniques, and one of the avenues I was pursuing required me to read back subsamples and use them to compute coverage.  However I quickly ran into the problem that I didn’t know the sample position for a given subsample index.  With FEATURE_LEVEL_10_1 and FEATURE_LEVEL_11 there are standard MSAA patterns you can use, but unfortunately I’m still stuck on a 10-level GPU so that wasn’t an option.  After some thinking I realized that it wouldn’t be too hard to write an app that could determine the sample positions within a reasonable degree of accuracy, so that’s what I did!  The basic process is like this:

It was a piece of cake to implement, and it seems to actually work! So I added a super-sweet visualizer (as you can see in the picture above), and packaged it up so that you guys can enjoy it as well.  Download it here: http://mynameismjp.files.wordpress.com/2014/06/samplepattern.zip (includes source and binaries, requires a DX10-capable GPU).

Update 9/13/2015: I updated this project while working on a blog post about programmable sample points, and uploaded it to GitHub. The new version has more accurate sample point detection, and displays the positions using the conventions established by the D3D Sample Coordinate System. It also can optionally link to NVAPI, in which case it can show a demonstration of how to setup programmable sample points that vary across a 2x2 quad of pixels.

I have also recently been experimenting with anti-aliassing techniques on DirectX 10. At the 2009 GDC, there was a talk called the “A to Z of DX10 Performance”. On the topic of “Resolving MSAA Buffers”, the slides advise not to create the back buffer with MSAA, but I cannot figure out why. I can only assume that this is so that the graphics programmer has explicit control over when they perform an MSAA resolve (as this operation isn’t free), but I suspect there could be other reasons. I was wondering if you knew anything about this, and if so, if you could share your thoughts?

There’s certainly a lot of cases where you might want to have a custom MSAA resolve…for instance if you use HDR you can get significantly better results if you tonemap the subsamples individually. However I think they’re saying that because pretty much any DX10 game is going to be doing some sort of post-processing, and thus will want to render their geometry to a render target texture and not the back buffer. In that case there’s no reason to make the back buffer MSAA, since you only need MSAA when rendering scene geometry.

I re-hosted the zip file here at wordpress, and updated the link.

[…] the samples would be located. Without that, you either had to use shader intrinsics or resort to wackier methods for figuring out the sample positions. In theory it also gives you a very limited ability to […]

The link says “service unavailable”… can you please reupload it?