Officially, Nvidia’s PerfHUD is a performance-monitoring and debugging application for use with Nvidia GPU’s. Unofficially, it’s pure awesomeness for a graphics programmer.  While I personally find PIX to be a more useful tool when it comes to debugging, the fact that PerfHUD gives you hardware-specific details makes it infinitely more useful for profiling. At work I find myself using it every time there’s a performance issue on the PC. Here’s some of the things I like to do with it (warning, it’s a long list!):

When doing graphics in Windows, something you always need to be wary of is spending too much time sitting around in the driver instead of giving the GPU enough work to do. With PerfHUD instead of looking at the number of Draw/SetRenderState/SetTexture calls and guessing their impact (although PerfHUD will show you these values if you want), you get a nice sweet graph that shows you your driver time, GPU idle time, and total frame time.

These graphics make it very obvious whether your app is CPU-bound or GPU-bound, and if you are CPU-bound you can tell whether it’s because you’re spending too much time in the driver.

Want to know how much memory your app is using? PerfHUD tells you. 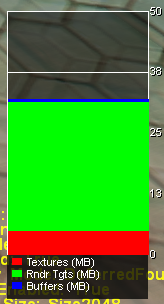 The default PerfHUD layout includes a graph showing you which percentage of unified shaders are being used for different shader types. This lets you know if you’re spending a lot of time in vertex, geometry, or pixel shaders.

The default layout also has a graph showing you how much you’re using the input assembler, shader units, texture units, and ROP’s:

Above I used the term “default layout” a few times. I do this because the initial layout you get isn’t fixed, and you can customize it. You can add new graphs, move them, remove them, and customize the data shown on a graph. This lets pick and choose from the various performance counters available, and also change how the data is displayed. For instance you can select ranges, or switch between frame percentage or raw time.

PerfHUD has hot-keys that let you toggle different experiments on and off. These include:

7. View textures and render targets for a draw call

This is something you can do in PIX so it’s not that smile, but I’m mentioning this because PerfHUD makes it easier to view all of the textures and render targets at the same time. In PIX you have to look at the debug state and open a new tab in the Details view for each texture/RT, which is kinda annoying. Also note that when you do this the current state of the backbuffer is shown on the screen, with the current Draw call highlighted in orange. You don’t see anything in my picture since the app doesn’t draw anything to the backbuffer until the final step. 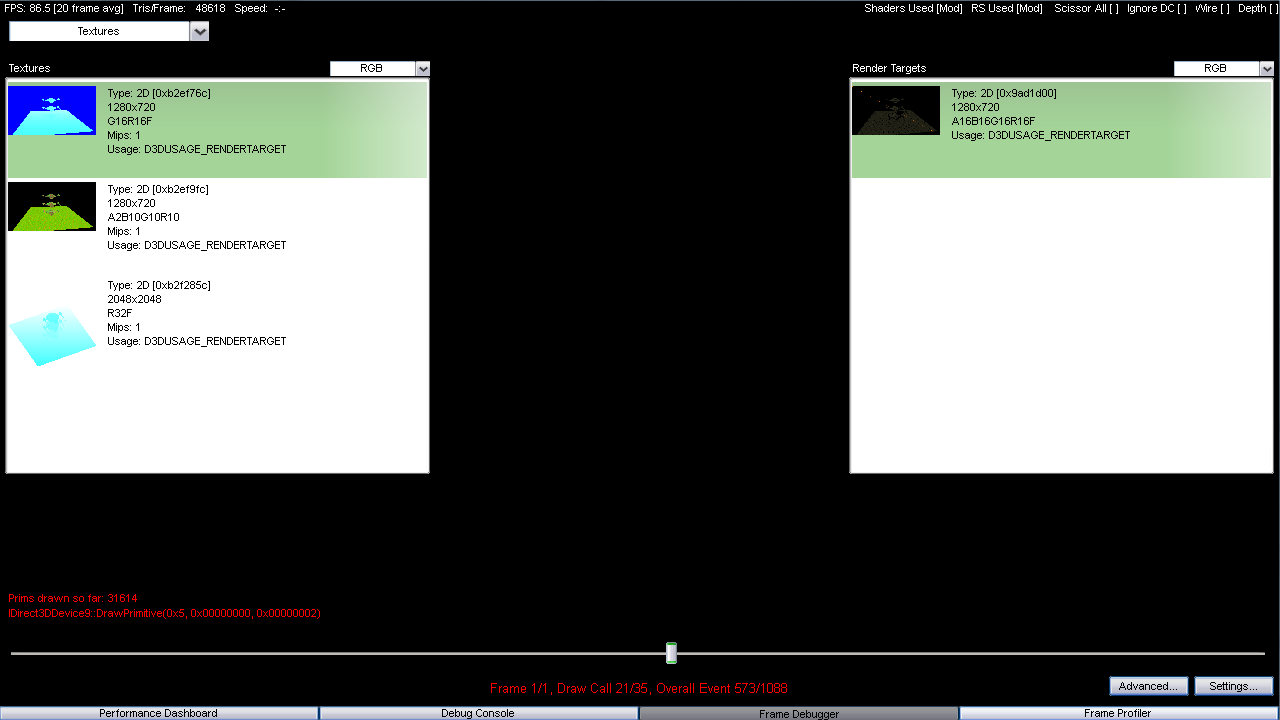 8. View dependencies for a Draw call 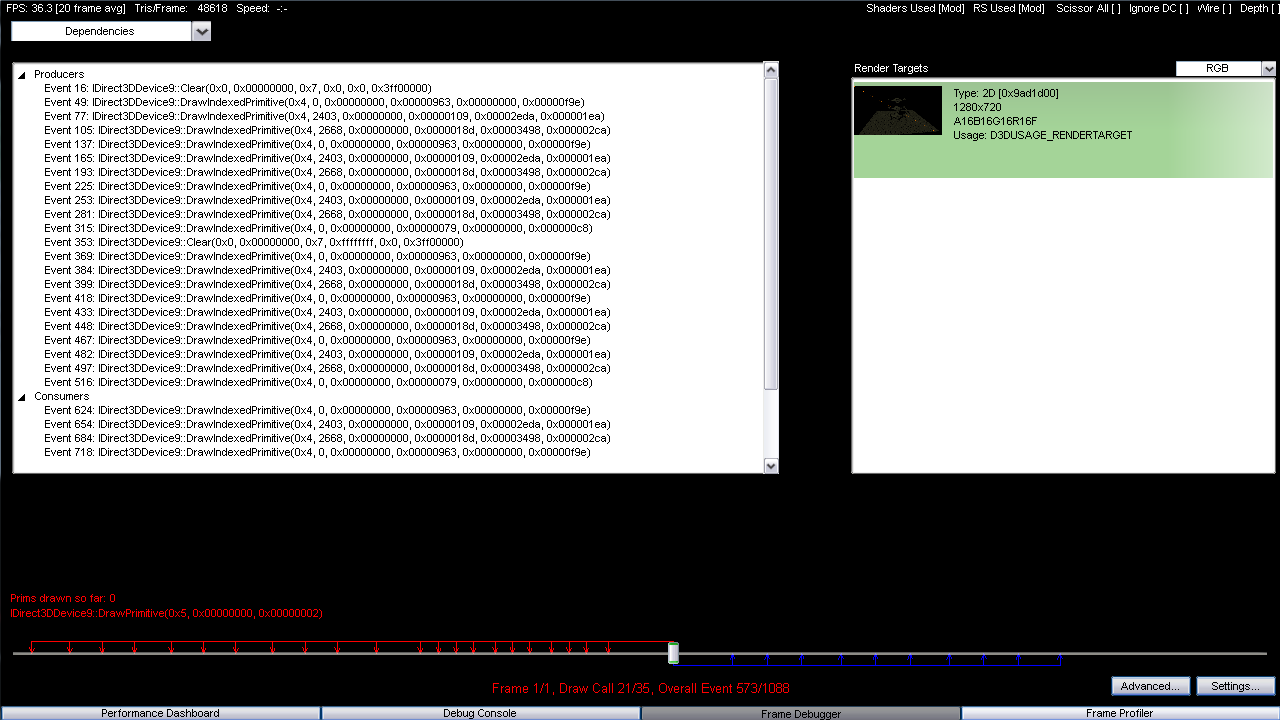 9. View and modify states for a Draw call

PIX is really good at letting you see the current device state at a certain point in a frame, but PerfHUD takes this a step further by letting you modify them and instantly view the results. 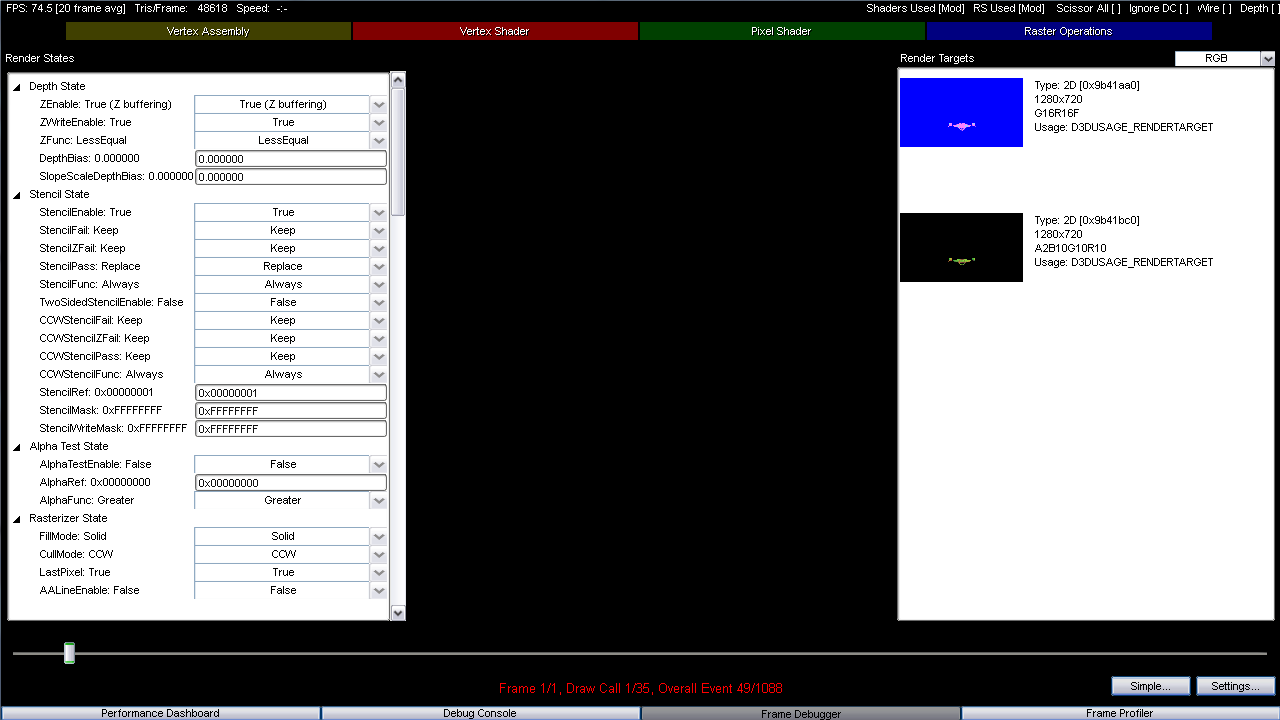 PerfHUD doesn’t let you debug shaders like PIX can, but it does let you modify a shader and see the live changes in your app. You can also load up any shader from file, compile it, and replace that shader. 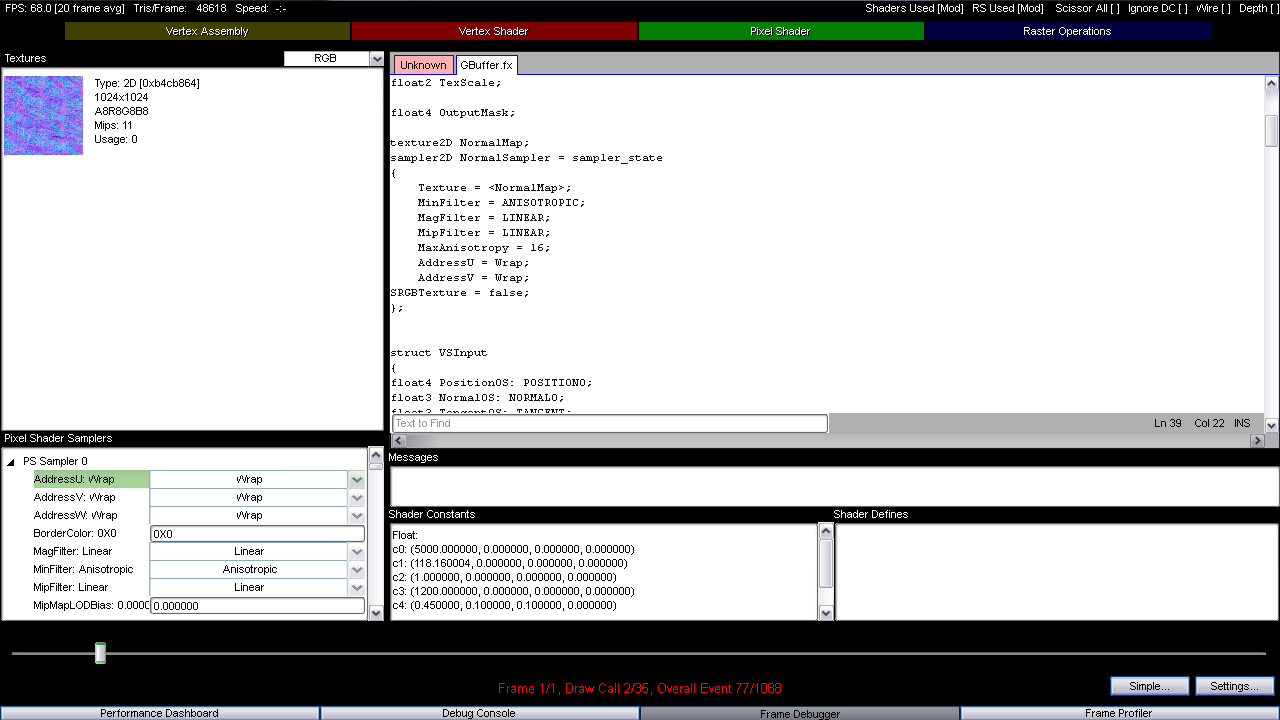 In the Frame Debugger, you can replace a specific texture with one of the following:

Here’s a screenshot showing the mipmap visualization texture applied as the diffuse albedo texture for all meshes: 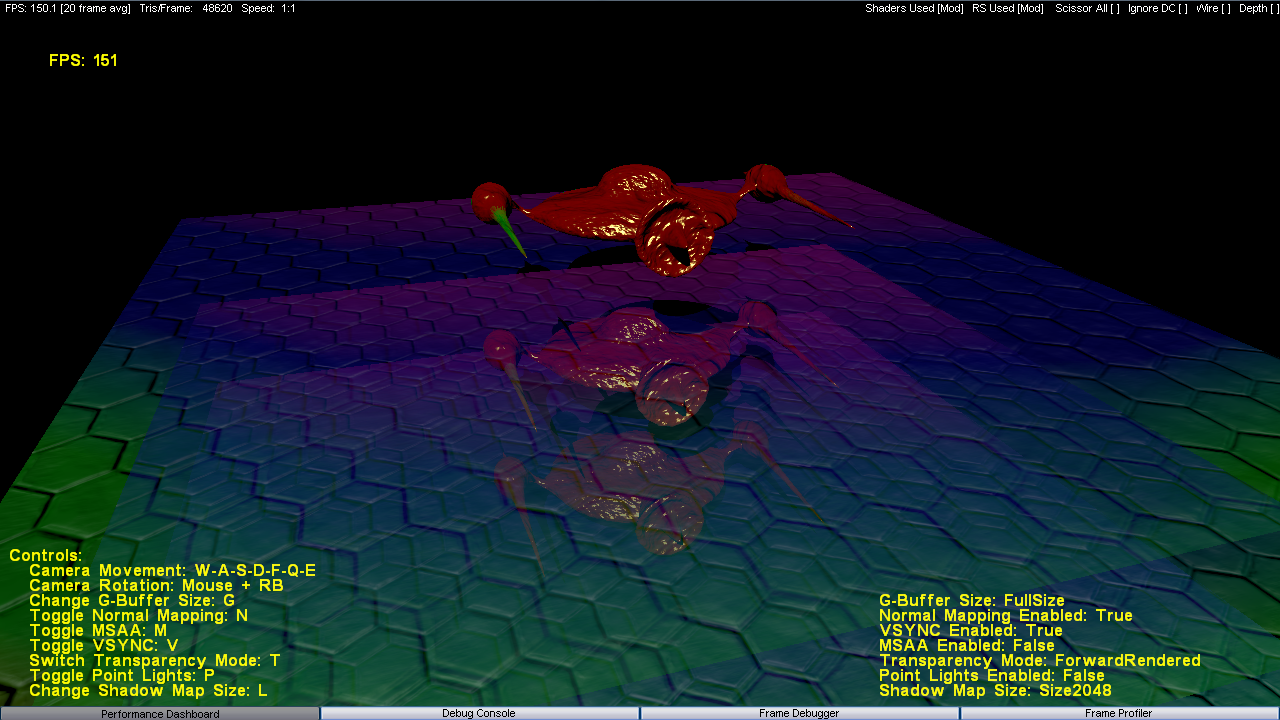 The Frame Profiler is easily the coolest part about PerfHUD. It presents you with a whole slew of information about what’s going on with the GPU for different parts of a frame, and makes it easy to figure out which parts of your frame are the most expensive for different parts of the GPU pipeline. In fact, PerfHUD will automatically figure out the most expensive draw calls and indicate it for you. I’m not going to go through each feature in detail since I want this post to stay readable, but I’ll give you a list:

The following image shows the frame profiler in action. The graph is showing the bottleneck percentage per Draw call, and the selected Draw call is in the shadowmap generation pass. As you’d expect, the call is primarily bound by the input assembler stage since the shaders are so simple. You can also see that PerfHUD grouped all of the other shadow map generation Draw calls into the same state bucket. 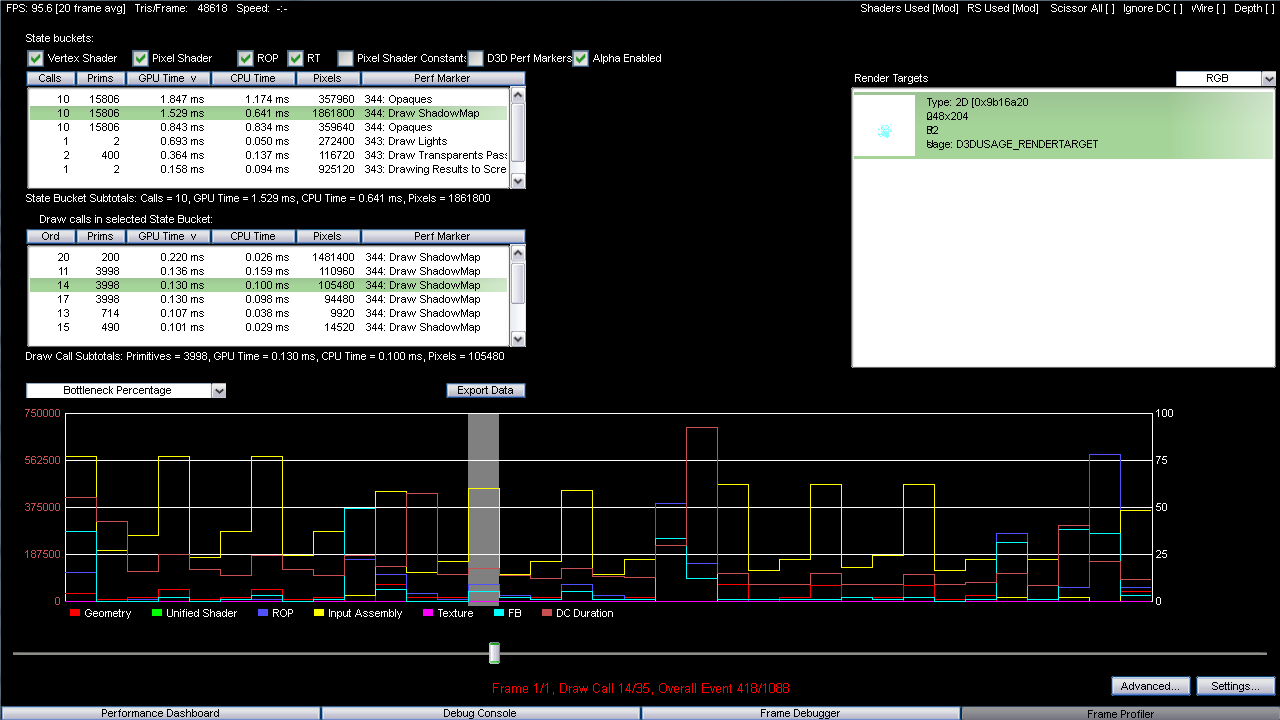 […] the PerfHUD performance profiling overlay. There’s a good overview of the interface by MJP, here. Tweet This entry was posted in Uncategorized. Bookmark the permalink. ← Acronym […]

[…] Matt “Perf Analyzer” Pettineo has a new post about analyzing Direct3D performance using NVIDIA PerfHUD, where he goes into great deal about each feature of the tool. Read all about it on his blog. […]

xna will set SoftwareVertexProcessing mode when perfhud is being used due to perfhud requirement for Reference device setting how do you work around that? I get 1 frame every 30 to 40 seconds with my app perfhud is unusable for me

Always thank you for useful article. Can i copy this post to my blog and translate into korean?

In XNA 4.0 the member GraphicsDeviceInformation.DeviceType is gone. When I try to start my test game with PerfHUD it says: No suitable graphics card found. Unable to create the graphics device. What can I do? Thanks :)