So like I said in my last post, I’ve been doing some research into Inferred Rendering.  If you’re not familiar with the technique, Scott Kircher has the original paper and presentation materials hosted on his website.  The main topic of the paper is what they call “Discontinuity Sensitive Filtering”, or “DSF” for short.  Basically it’s standard 2x2 bilinear filtering, except in addition to sampling the texture you’re interested in you also sample what they call a a “DSF buffer” containing depth, an instance ID (semi-unique for each instance rendering on-screen), and a normal ID (a semi-unique value identifying areas where the normals are continuous).  By comparing the values sampled from the DSF buffer with the values supplied for the mesh being rendered (they apply the DSF filter during final pass of a light-prepass renderer where meshes are re-rendered and sample from the lighting buffer), they can bias the bilinear weights so that texels not “belonging” to the object being rendered are automatically rejected.  They go through all of this effort so that they can do two things:

The second part is what’s interesting, so let’s talk about.  Basically what they do is they break up the G-Buffer into 2x2 quads.  Then for transparent objects, an output mask is applied so that only one pixel in the quad is actually written to.  Then by rotating the mask, you could render up to 3 layers of transparency into the quad and still have opaques visible underneath.  For a visual, this is what a quad would look like if only one transparent layer was rendered: 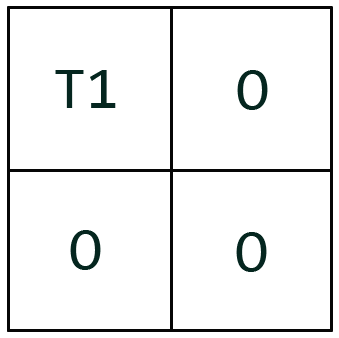 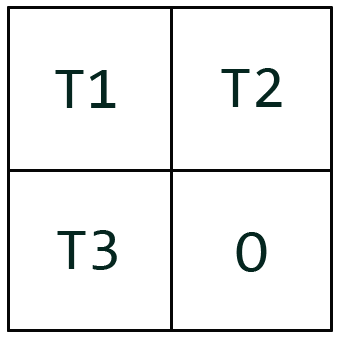 After laying out your G-Buffer, you then fill your L-Buffer (Lighting Buffer) with values just like you would with a standard Light Pre-pass renderer.  After you’ve filled your L-Buffer, you re-render your opaque geometry and sample your L-Buffer using a DSF filter so that only the texels belonging to opaque geometry get samples.  Then you render your transparent geometry with blending enabled, each time adjusting your DSF sample positions so that the 4 nearest texels (according to the output mask you used when rendering it to the G-Buffer) are sampled.

So you can light your transparents just like any other geometry, which is really cool stuff if you have a lot dynamic lights and shadows (which you probably do if you’re doing deferred rendering in the first place).  But now come the downsides:

Regardless, I think the technique is interesting enough to look into.  Personally when I read the paper I had major concerns about what shadows would look like on the transparents (especially with a lower-res L-Buffer), which is what lead to me to make a prototype with XNA so that I could evaluate some of the more pathological cases that could pop up.  If you’re also interested, I’ve uploaded the binary here, and the source here.  If you want to run the binary you’ll need the XNA 3.1 Redistributable, located here.

One thing you’ll notice about my implementation is that I didn’t factor in normals at all in the DSF filter, and instead I stored depth in a 16-bit component and instance ID in the the other 16 bits.  This would give you much more than the 256 instances that the original implementation is limited to, at the expense of some artifacts around areas where the normal changes drastically on the same mesh.

[…] With everyone and their mother using a deferred renderer these days, more often than not what’s displayed on the screen is the result of several passes.  This means that when things go wrong, it’s hard to guess the problem since it could have occurred in multiple places.  Fortunately PIX can help us by letting us pick any singular Draw call and see exactly what was drawn to the screen.  All you have to do s capture a frame, find the Draw call in the Event view, and then click on the “Render” tab in the Details view.  Here’s a screenshot I took showing what was drawn to the normal-specular buffer during the G-Buffer pass of my Inferred Rendering Sample: […]

The download links to your SkyDrive files are broken…

Great post! A lot of help Small question, why use “return float4(color * Alpha, Alpha);” and “SrcBlend = ONE;” during alpha blend? Is it an optimization trick?

That bit with the specular is a normalization factor. It’s there to ensure that energy is conserved for the BRDF. You can derive it if you take the blinn-phong equation, set up an integral around the hemisphere, and solve for 1. The diffuse factor is multiplied in so that the attenuation is applied to the specular, and so that you don’t get incorrect specular reflections due to normal maps.

Thank you! You are a helpful guru~

[…] Use some sort of screen door transparency like the one implemented by Inferred rendering. This is basically opaque rendering in which the “alpha” object is rendered on top of […]